The U.S. Government Accountability Office (GAO) has begun a new effort to examine the nation’s fiscal heath at the start of each calendar year and inaugurated the effort by issuing its first annual outlook on the nation’s fiscal future. According to the press release announcing the new report, The Nation’s Fiscal Health: Action Is Needed to Address the Federal Government’s Fiscal Future, “discusses significant changes to the nation’s fiscal condition in fiscal year 2016, long-term simulations of the federal debt, and fiscal risks placing additional pressure on the federal budget.”

The new report, based on the FY 2016 Financial Report of the U.S. Government and GAO’s audit of the government’s FY 2016 and 2015 consolidated financial statements, also includes GAO’s recommendations on steps that federal agencies can take to improve the fiscal situation, including “reducing improper payments; closing the tax gap; eliminating duplication, overlap, and fragmentation in federal programs; and producing better information on program and fiscal operations to strengthen decision-making.”

GAO notes that federal spending continues to outpace revenue—by $587 billion in 2016—and, absent policy changes, the structural gap between revenues and spending puts the federal government on an unsustainable long-term fiscal path.

A key measure in fiscal health is the debt held by the public as a share of Gross Domestic Product (GDP). The U.S. historical high of debt-to-GDP was 106% in 1946. The figure below shows that under the various scenarios the debt-to-GDP ratio would remain somewhat stable over the next few years, but would then increase and surpass its historical high of 106 percent within 15 to 25 years and would continue to grow after that point. 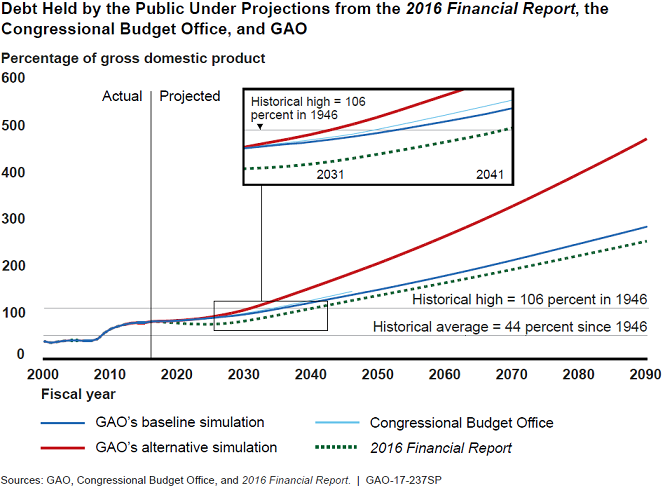 GAO concludes that this fiscal path – driven largely by health care spending and net interest on the debt – is unsustainable and if unaddressed would put increased pressure on the rest of the federal budget, limit lawmakers’ ability to respond to unforeseen events, and increase the likelihood of a future fiscal crisis.

Other recommendations that GAO makes or reiterates include:

The announcement of a brand new annual fiscal assessment and the release of the current fiscal outlook comes at a crucial time of presidential transition. While the timing of such an effort is what it is, the emphasis on the unsustainability of the current fiscal path – although not a new theme for many – will likely provide fodder for all sides in the unfolding policy and funding debates that come with new administrations and new policy agendas. Every administration and Congress inherits both good and bad scenarios by those that came before them. The challenge to the incoming Trump Administration and new Congress is where to go from here.