This month, the American Council of Engineering Companies (ACEC) held its annual conference with a focus on change and innovation in the architecture, engineering and construction (AEC) industry. The general tenor of the conference, which took place in Boston, Mass., was looking to the future and how to prepare in a variety of ways. The engineering industry must lead by example while understanding what is required to develop new ideas and tactics such as big data and smart cities in an ever-changing world.

Several conference sessions delved into an array of industry trends including economy technology, urbanization, climate change and demographics. Demographics was touted as the one constant that could be leaned on as a way to understand future industry needs. Using the GovWin IQ government snapshot tool, vendors can research every government entity to see employment trends as well as overall expenditures and future forecasts.

A common thread in some of the event sessions was that of the United States’ failing infrastructure. This is nothing new, as it has been occurring over the past few decades, but seems to be getting more pronounced. One particularly troubling trend is the deterioration of bridges. The map below, courtesy of the Washington Post and Federal Highway Administration, depicts where the most dangerous bridges are located. A large amount of troublesome bridges are located in the Northeast and Midwest. 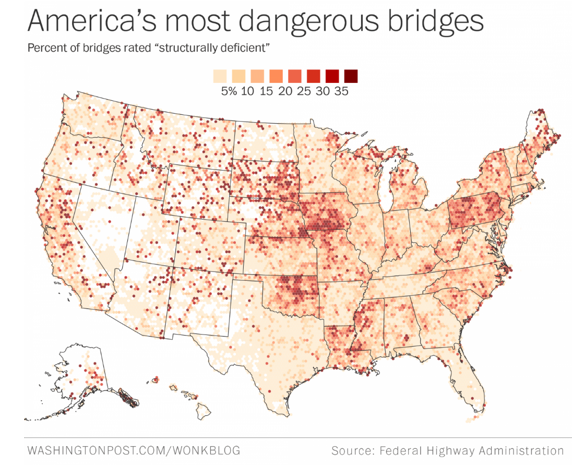 Deltek’s GovWin IQ tool has been tracking the release of solicitations for bridges for a number of years, and there are some correlations to the above map when looking at activity from October 2013 through October 2015. The states that contain the largest percentage of obsolete bridges include Connecticut, Hawaii, Massachusetts, New Jersey, Rhode Island, Vermont, Washington, West Virginia, and Washington, D.C., while Texas has the most obsolete bridges. The map below shows which states released the most bids related to bridges. Several states appear in both lists, including Pennsylvania, New Jersey and Texas.

Many of the states with major bridge repair and replacement needs issued very few bids related to bridges, such as Massachusetts with only 23. The reasons for this disparity and lack of procurement activity for infrastructure may vary by state, but in most cases there is one major reason: funding. It is estimated that the U.S. bridge problem will require more than $20 billion over the next decade, and that's assuming work begins immediately.

The ACEC conference encouraged engineers to begin rethinking how to rebuild. This may include turning to manufacturing portions of bridges that would be readily available when bridge upgrades and retrofitting take place. While other possibilities may be considered, one thing is clear: Current and future engineers must develop new ways to bridge this gap, literally.