As is typically the case, each NDAA addresses many areas that span the gamut of DoD functional areas, from personnel policy and weapons systems to research and development programs. Similar to most of the NDAAs over the last several years, the FY 2016 NDAA has several specific cybersecurity provisions to continue to highlight the importance of cyber at DoD and for the overall defense mission.

Last week, I looked at the several cybersecurity-related priorities in the current House version of HR 1735 which the House Armed Services Committee (HASC) wants the Pentagon to address in varying degrees of specificity. This week I want to identify specific funding authorizations included in the House bill to provide a snap-shot of cybersecurity-related funding priorities.

The Funding Tables in Division D of the bill accounts for nearly 70 pages of the 950-page House bill and reviewing the tables provides some insight into funding priorities and the appropriations area (Procurement, Research, O&M) where these would be funded. (See table below.) 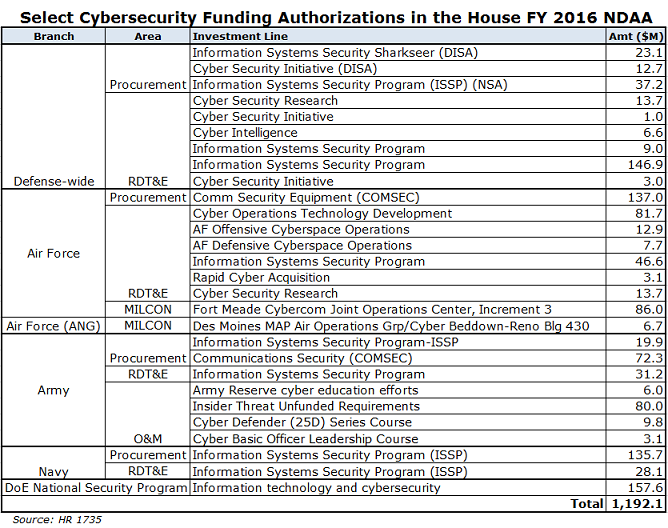 Of the nearly $1.2 billion in cyber-related funding lines in the bill the Air Force accounts for about 33% of the total while Defense-wide and Army come in at around 20% each. The Navy and Department of Energy National Security Programs split the remainder at roughly 14% and 13% respectively.

Nearly 40% of the $1.2 billion is targeted for the various branches’ Information Systems Security Program (ISSP) efforts. More than $437 million fall within defense Procurement programs and $405 million are in RDT&E programs. Both the DoD and Air Force have their funding at about 35% in the Procurement category with most of the rest in RDT&E. About 45% of the Army’s $222 million in funding falls in the O&M category and Navy has more than 80% of their funding coming through Procurement programs.

The commonalities and variances suggest both the shared priorities among the branches as well as areas where specific activities are needed within the department.

---
Originally published for Federal Industry Analysis: Analysts Perspectives Blog. Stay ahead of the competition by discovering more about GovWin FIA. Follow me on Twitter @GovWinSlye.