The FY 2019 President’s Budget Request included data on the Administration’s intent to spend hundreds of millions more dollars on cybersecurity across federal departments and agencies large and small.

In the Analytical Perspectives section of the latest budget, the Office of Management and Budget (OMB) includes a chapter specifically on Cybersecurity Funding. The inclusion of the funding detail was required under provisions included in the FY 2017 Consolidated Appropriations Act (omnibus). OMB’s analysis addresses that legislative requirement and covers cybersecurity activities and funding for all federal agencies, not just those carried out by the Department of Homeland Security (DHS) and Department of Defense (DoD).

The FY 2019 budget requests a total of nearly $15B for FY 2019, up from an estimated $14.4B in the current FY 2018 and also an increase over the FY 2017 level of $13.2B. If enacted, the FY 2019 level would represent more than a $583M increase over FY 2018, or +4%, and a $1.8B (+14%) over the final FY 2017 spending level. One caveat that OMB notes is that these amounts do not represent the entire cyber budget because sensitive and classified elements were omitted from the public budget release. Assuming that these classified areas also received increases would mean that federal cybersecurity spending could see a one-year increase of 20% or more. (See chart below.) 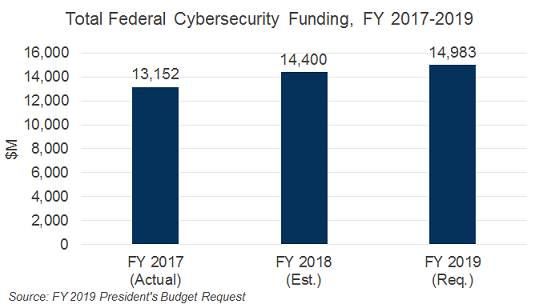 The bulk of federal cybersecurity funding in the FY 2019 budget is concentrated within the largest departments and among those with the largest cyber-related missions. These top ten departments account for nearly $13.5B in FY 2019 cybersecurity budgets, which is about 90% of the federal dollars in the public document released by OMB. The other 14 CFO Act departments, (NASA, DOT, NSF, Ed, USDA, Interior, Labor, GSA, OPM, EPA, USAID, NRC, HUD and SBA) account for $1.2B in cyber funding for FY 2019, which represents about 8% of the FY 2019 total and a combined budget increase of 5% from FY 2018 estimate.  The non-CFO Act agencies, mostly small and independent agencies, account for a combined $355M (2.4%) in funding for FY 2019 and remain flat from FY 2018 but would be 15% above FY 2017. (See chart below.)

OMB also provides additional details into the bureau-level funding that rolls up into the specific departments, although they omit DoD detail citing the sensitive nature of the information. Below are a few observations of noteworthy increases:

OMB notes that these budget figures account predominantly for an agency’s cybersecurity efforts to protect their own networks and data. However, for departments that have a broader mission in the federal cyber- landscape to assist other agencies through multi-agency programs and government-wide standards, etc. the dollars reported also encompass these broader missions.