A few weeks ago the White House released its full fiscal year (FY) 2019 budget request and DHS continues to be allotted one of the largest information technology (IT) budgets among all federal departments, especially among the civilian departments where DHS ranks first for FY 2019.

DHS IT and New Development Budgets

The year-to-year changes for the various directorates and agencies are pretty diverse, but due to the uncertainty of the FY 2018 budget data that OMB provided I chose to base the growth comparisons on FY 2017. (See table below.) 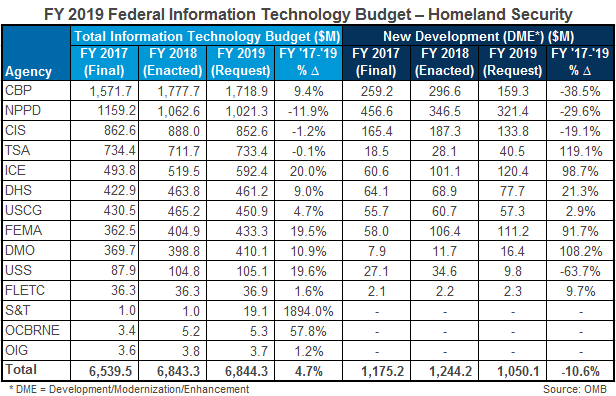 Looking at the portion of each agency’s allocation for DME reveals a wide variety in change from FY 2017 to FY 2019. The key observation to note among these directorate budgets is that those with growth in Total IT from FY 2018 to FY 2019 also generally see growth in their DME budgets. This is especially true for TSA, ICE and FEMA, but is also visible at FLETC and for the Departmental Management and Operations (DMO) area.

Delving into the details of DHS’s IT investments and initiatives gives deeper insight into their priorities, which is largely infrastructure-focused. Here are just five initiatives that stand out among others due to relative size, budget growth, and/or proportion of new development spending.

Of course, Congress will have the final say when the responsible appropriations committee takes up the FY 2019 DHS budget later this year. Final FY 2018 discretionary and IT budgets still remain in CR limbo as Congress continues to work on what will likely be an omnibus appropriations covering the remaining half of the fiscal year.

Nevertheless, it is worth noting that for FY 2019 most of the DHS directorates are slated for significant growth over their FY 2017 budget levels. So while FY 2018 may be a murky year at this point we can be relatively hopeful that most of these agencies will sustain some growth in the coming fiscal year.