GAO studied invests with 80% or more of their FY 2015 budget allocated to development, modernization and enhancement (DME). GAO’s objectives were to evaluate agency processes for assigning risk ratings for predominately DME investments and to assess the risk of federal IT investments, including any discrepancies with CIO risk ratings.

GAO conducted independent risk assessments for 95 IT investments, covering 17 agencies, and found discrepancies between its risk ratings and those of the agency CIOs for 73 investments. Generally, GAO rated investments as riskier than the agency CIOs.  The diagram below shows the differences between GAO and agency CIO ratings: 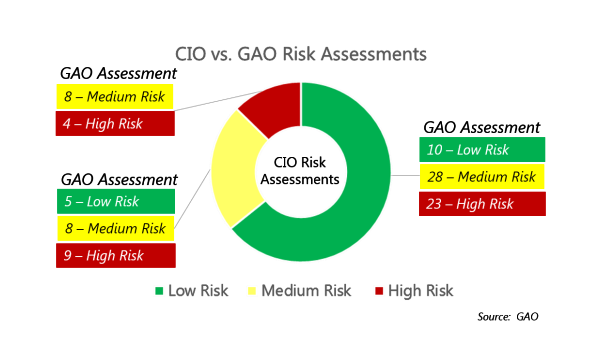 GAO found that agencies used a variety of methods for determining IT investment risk, some of which incorporated OMB’s six suggested factors.  Additionally, GAO found inconsistency in the frequency of updates of risk ratings on the IT Dashboard.

GAO made 25 recommendations to 15 agencies to improve the quality and frequency of CIO ratings.  GAO’s recommendations for executive action to ensure IT Dashboard ratings more accurately reflect risk included: