On June 7, 2016, the House passed the Making Electronic Government Accountable By Yielding Tangible Efficiencies (MEGABYTE) Act of 2016 (H.R. 4904), The legislation is similar to the measure introduced in the senate last December (S. 2340, the MEGABYTE Act of 2015) and would require the Office of Management and Budget (OMB) to lead federal agencies in the development of a comprehensive policy for software licensing. Most of the provisions of the bill would formalize and build on current policies and practices of the federal government.

In recent years, the Office of Management and Budget (OMB) has reported that agencies spend about $6 billion annually on software licenses. Deltek analysis of reported federal spending saw a 9.2 percent increase on software spending from FY 2014 to 2015, continuing the upward trend from the prior year. This growth was driven by investments in key organizations. Not surprisingly, the Defense Department and military services ranked highly among top organizations for software purchasing in FY 2015. Both the Army and Defense Agencies increased investments in software by around 20 percent (in relative terms) from FY 2014 to 2015. Based on where contract vehicle data was available, the General Service Administration’s IT Schedule 70 and the National Aeronautics and Space Administration’s (NASA) Solutions for Enterprisewide Procurement (SEWP) topped channels for software purchases. 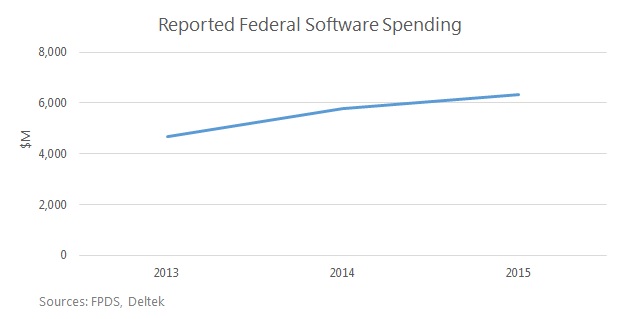 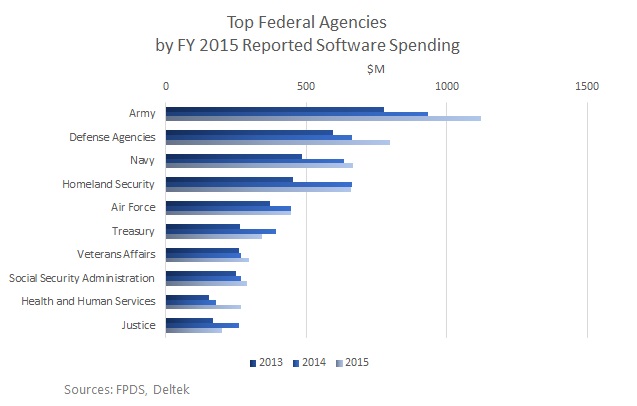 The MEGABYTE Act would formalize and codify current efforts driven by the Federal Information Technology Acquisition Reform Act (FITARA) as well as government-wide agreements and agency initiatives. In particular, it would codify recent orders aimed to encourage agencies to align efficiency efforts on an enterprise level. On June 2, 20216, federal agency leadership received new direction related to category management approach to software licensing. Specific steps towards implementing this approach include the development of government-wide software license agreements for mandatory agency, promotion of exemplary existing software licensing agreements. Other activities to centralize and improve management of software licenses include appointment of an agency software manager reporting into the CIO to lead agency-wide efforts, completing and maintaining an inventorying of agency software licenses, and leverage analysis of licensing inventory to streamline investments.

Despite the emphasis on cost-savings, According to the Congressional Budget Office, enacting the MEGABYTE legislation is not likely to significantly impact on the net budget over the next five years. Agencies not funded through annual appropriations could see an affect to direct spending, but any net changes are expected to be negligible. At the same time, the direction from OMB references a 2014 report from the Government Accountability Office that found numerous examples from federal agencies achieving cost avoidances through management of enterprise license agreements. In one case, the Department of Homeland Security achieved $181 million in savings (in FY 2012) through consolidation of enterprise license agreements. In other examples, savings were more modest – such as NASA’s $33 million saved through contract consolidation. In the context of billions of dollars allocated in departmental budgets, these figures may amount to rounding errors. Within the realm of IT investments, however, they could reflect meaningful cost and operational improvements.

Originally published for Federal Industry Analysis: Analysts Perspectives Blog. Stay ahead of the competition by discovering more about GovWinIQ. Follow me on twitter @GovWinFuss.