Fiscal Year (FY) 2015 was a challenging year in federal cybersecurity and the most recent Federal Information Security Management Act (FISMA) report from OMB shows that federal departments endured another year of double-digit growth in security incidents.

The FY 2015 Report to Congress on the Federal Information Security Modernization Act (FISMA) provides OMB’s assessment on what agencies have achieved in FISMA-related information security in the previous fiscal year.  Of particular interest is the number of security incidents that are being reported to the US Computer Emergency Readiness Team (US-CERT). (See chart below.)

Of the total 77.2K incidents reported in FY 2015, 12,294 (16%) were classified as Non-Cyber, which is used for filing all reports of personally identifiable information (PII) spillages or possible mishandling of PII, which involve hard copies or printed material as opposed to digital records. The remaining 64,889 (84%) are what we typically think about as cyber-related, fitting among specific types of security incidents under the definitions provided by US-CERT and falling into 6 categories by varying proportions: (See the list and chart below.) 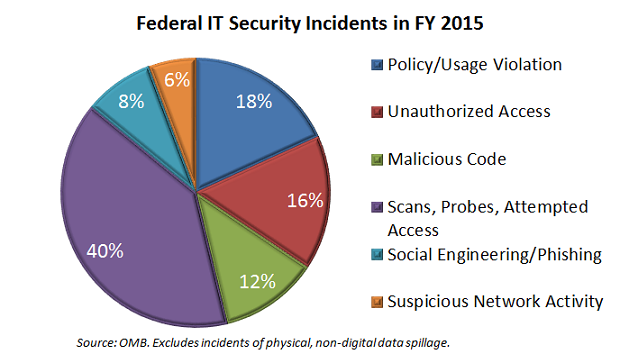 These 6 categories account for more than 84% of all incidents reported by federal agencies, large and small. Having factored out the Non-Cyber category, 34% of the remaining “true cyber” category incidents are related to what could be characterized as internal behaviors – policy violations, PII mishandling, equipment loss, etc.  The remaining two-thirds fall into an external threat bucket, like malicious code insertions, phishing attacks, port scans, and brute force attacks.

This mix of internal and external threats to cybersecurity is not all that unusual for annual FISMA reporting. A consistently high level for Policy and Usage Violations continues to underscore the need for effective security policy and ongoing security training of general IT users at federal departments so that users do not introduce vulnerabilities through their behavior. OMB does report a jump in incidents of Suspicious Network Activity and Scans, Probes, and Attempted Access, which underscores the need for increasingly advanced network monitoring and greater automation of security functions.

---
Originally published for Federal Industry Analysis: Analysts Perspectives Blog. Stay ahead of the competition by discovering more about GovWin FIA. Follow me on Twitter @GovWinSlye.