Federal   Department of the Interior   Forecasts and Spending   Contracts and Programs 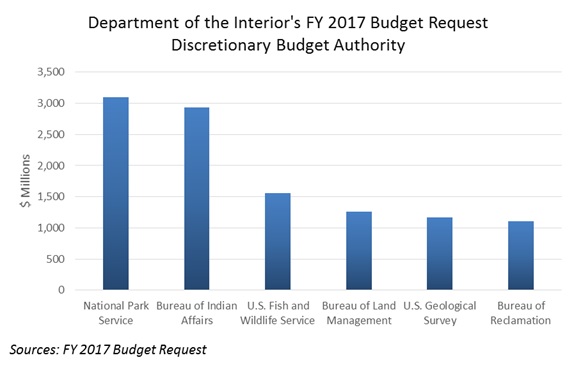 With an overall increase of one percent, the budget request for Interior’s information technology roughly maintains investment levels. Total top line numbers for IT spending are set to increase by $15 million from FY 2016 to FY 2017. The share of that funding marked for development, modernization, and enhancement in FY 2017 is slightly up from the previous year at 13.3 percent of the total $1.2 billion request. Contractor addressability rose slightly across the IT investments, increasing from 75.8 percent in FY 2016 to 77.2 percent in FY 2017. The top ten investments by total request account for $919 million, 76.0 percent of the total IT request. These top investments are set to grow by a combined total of $85 million from FY 2016 to FY 2017. 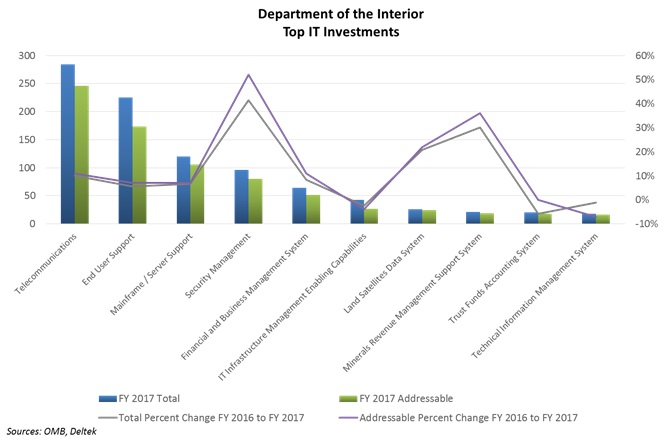 Departmental infrastructure continues to top investments for total funds requested for FY 2017. Based on the total investment dollars provided for FY 2017, spending on infrastructure, security, automation and telecommunications comprises 63.5 percent of the Interior’s IT portfolio. Strong support continue to optimize the agency-wide Financial and Business Management System with targeted investments to improve reporting and increase data quality and transparency. Interior also is also making oversight improvements aligned with implementation of the Federal Information Technology Acquisition Reform Act (FITARA), which aims to deliver strengthen information management and technology efforts through standardization along with strengthened governance and strategic planning.

Originally published for Federal Industry Analysis: Analysts Perspectives Blog. Stay ahead of the competition by discovering more about GovWinIQ. Follow me on twitter @FIAGovWin.