Yesterday, the First Responder Network Authority (FirstNet) released its official request for proposals (RFP) for the deployment of a nationwide public safety broadband network. The long-awaited release comes after a year of meetings with states and the release of multiple requests for information (RFIs). FirstNet will conduct a two-hour public webinar on Friday, January 15, at 1 p.m. EST. Questions regarding the RFP are due February 12, and capability statements are due March 17. Proposals are due by April 29. 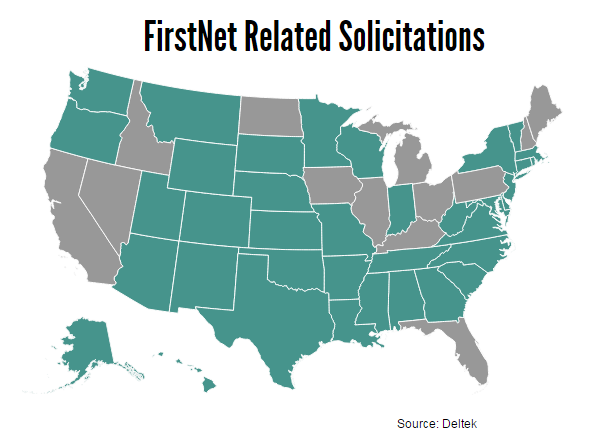 The state of Nevada released an RFP in December 2014 for a Public Safety Broadband Outreach and Program Specialist. The awarded vendor, LeGrande Technical and Social Services dba The Digital Decision, manages outreach and education efforts and provides project management support with issues involving FirstNet and the State and Local Implementation Grant Program (SLIGP).

Most recently, the Iowa Communications Network (ICN) sponsored an invitation to qualify (ITQ) to indicate Iowa telecommunications agencies’ desire to be considered for participation by national respondents as well as listed and endorsed by the Iowa FirstNet Broadband Committee. The state of Illinois also released an RFI for Public Safety Wireless Broadband Data Services to identify and assess the basis for potential partnerships with regard to implementing Illinois’ portion of the National Public Safety Broadband Network (IL-PSBN).

Now that the much-anticipated RFP is on the streets, it will be interesting to see not only which vendors respond to the RFP, but what states will do regarding broadband planning. FirstNet anticipates making an award in the fourth quarter of 2016.

You can learn more about current procurement opportunities and contract awards in the GovWin IQ State and Local database. Not a Deltek subscriber? Click here to learn more about Deltek's GovWin IQ service and gain access to a free trial.