Procurement year in review: State and local architecture, engineering and construction (AEC) by the numbers

Deltek’s GovWin IQ launched 2015 with a massive coverage expansion effort to bring more AEC business opportunities and market intel to state and local vendors. Our efforts are clearly paying off as 2015 saw a whopping 30.4 percent increase in AEC bid notifications compared to 2014.

The chart below details solicitations released by state and local entities throughout the year. Procurement activity was most active from March to June, which could mean robust bid activity in the months ahead. As is often the case with government business, solicitations saw the fewest releases during the holiday months of November and December.

Regionally, the South accounted for the majority of AEC bids, while the Midwest saw the fewest releases.

The bulk of AEC solicitations came from state departments, though cities were a close second. Special districts released the fewest AEC bids. 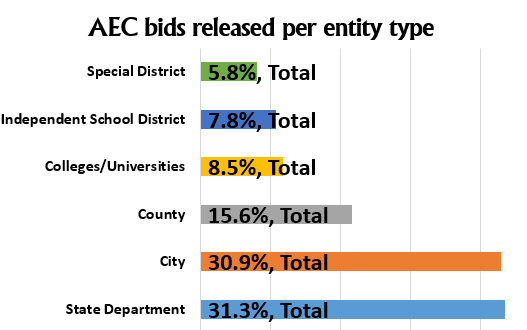 Here’s a look at the entities that released the most AEC bids in 2015.

Lastly, here are a few of the top-dollar AEC contracts awarded over the past year.

You can learn more about current procurement opportunities and contract awards in the GovWin IQ State and Local database. Not a Deltek subscriber? Click here to learn more about Deltek's GovWin IQ service and gain access to a free trial.