A cybersecurity study by the Government Accountability Office (GAO) revealed, among other things, that federal agencies are relying increasingly on contractor-operated IT systems for high-value areas that could have
“severe or catastrophic” impacts if they were breached or disrupted. Data in the study gives a glimpse into the agencies where this is most evident.

Recently, I looked at how GAO’s cybersecurity review shows growing reliance on contractors for important IT operations. OMB had agencies report the number of agency and contractor systems by “impact levels” – low, medium or high – as defined by the National Institute of Standards and Technology (NIST) in their 2004 Federal Information Processing Standards (FIPS) Publication 199. (For a link to both the GAO report and the FIPS 199 documentation, see my previous entry. Here, I thought I would dig a bit deeper at the agency level to see what we could glean from the available data.

In an appendix to their study, GAO provided some agency-specific data for fiscal year (FY) 2014 where agencies reported the number of agency and contractor-operated systems by impact level defined in FIPS 199. Rather than simply restate the data below I thought I would look at some of the relative proportions among the two main categories of agency-operated and contractor-operated to see what tendencies might emerge. (See table below.) 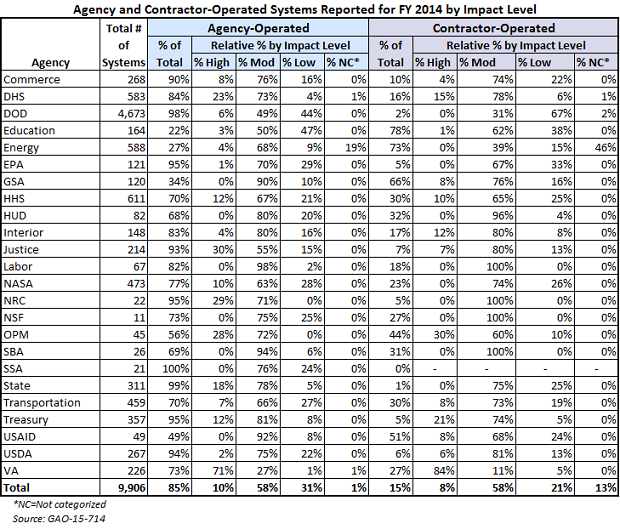 While the focus might naturally center on the number of systems that fall in the high impact level area for both categories, the sheer volume of systems in the moderate classification should draw some attention. Under the moderate impact level the loss of confidentiality, integrity, or availability could be expected to have “a serious adverse effect” on organizational operations, organizational assets, or individuals per FIPS 199.

Across both operational categories, 5,766 of the total 9,906 systems – nearly 60% of the systems – were designated at moderate impact level, compared to 10% and 8% of systems labeled high impact for agency-operated and contractor-operated respectively. This means that agencies and contractors alike must ensure that they are giving as much cybersecurity attention to these systems as they are to the high impact systems to protect against operational disruptions.