Has DHS Signaled the End of EAGLE?

The clock may truly be ticking for DHS’s $22 billion Enterprise Acquisition Gateway for Leading Edge II (EAGLE II) contract, according to a DHS official. Pressure from the Office of Management and Budget (OMB) for agencies to drop their home-grown contracts could mean that billions of dollars in IT contracts could shift to other vehicles.

OMB has been urging agencies to reduce the numbers of large catch-all contract vehicles to curb redundancies and reduce the costs associated with administering large competitions.  At a recent industry event, Jaclyn Smyth, associate director of the DHS Strategic Sourcing Officers, said that DHS officials are considering not renewing the EAGLE II contract vehicle once it expires, according to an article in Washington Technology. Smyth stated that there is a possibility that some DHS requirements might be issued under GSA Alliant, but she also noted that since EAGLE II does not expire until 2020 no final decisions have been made.

So it occurred to me to take a look at how EAGLE currently stacks up against other popular IT contract vehicles used at DHS. Looking at the reported IT contract obligations for 2014, the most recent complete fiscal year (FY), shows that EAGLE is not the only vehicle being widely used at DHS. FirstSource, a DHS IT commodities contract, and GSA Schedule 70 both double EAGLE’s contract obligations for FY 2014. However, IT areas like hardware and software, outsourcing, and communications services tend to favor these other contracts over EAGLE, which is heavily used for IT professional services like consulting and design, systems development and integration, and IT education and training. (See chart below.) 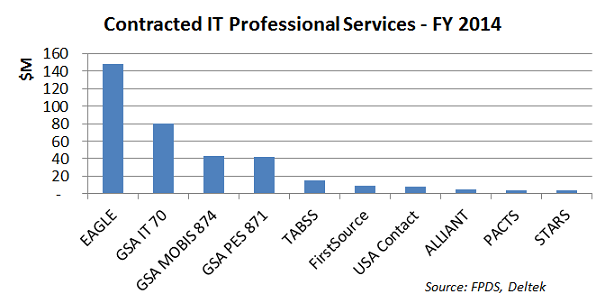 Alliant, the GSA vehicle which Smyth said may become the go-to contract if DHS decides to let EAGLE laps currently has a about an $5 million yearly run rate compared to EAGLE’s $150 million. That doesn’t mean DHS won’t make the switch, just that such a move will have significant impacts on Alliant’s business.

If DHS does decide to forego and EAGLE III – of which many who experienced the challenges of getting EAGLE II out of the nest might approve – it seems GSA stands to gain big.

Regardless of where the services contract dollars specifically flow, half of the current alternatives are GSA vehicles. And that is a significant sea change from just a few years ago when contract dollars were shifting away from GSA GWACs for agency-specific vehicles. It seems the reasons agencies opted for their own in-house contracts – more control, lower administrative fees, flexibility, etc. – may not be so compelling these days. The pendulum has swung back in favor of GSA. But the question is whether the same pendulum will shift back between now and 2020 when EAGLE II is up for recompete.

Originally published for Federal Industry Analysis: Analysts Perspectives Blog. Stay ahead of the competition by discovering more about GovWin FIA. Follow me on Twitter @GovWinSlye.